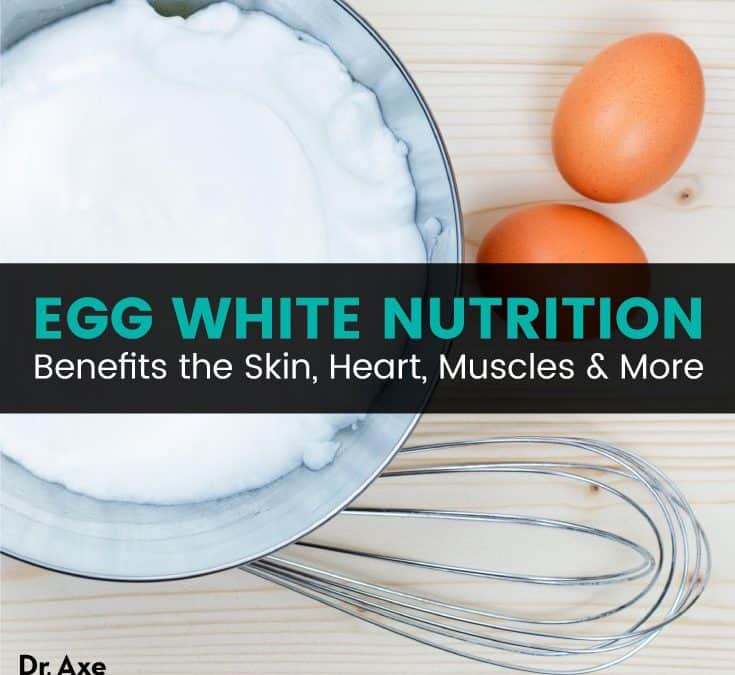 Article from Dr. Axe Food is Medicine From meringues to souffles, omelets and facial masks, egg whites jam a lot of nutrition in such a small package and may be the perfect food for skin care. They’re quite popular in the ketogenic diet as part of a combination with a healthy fat, such as avocado, and they can make a great facial mask for a healthy collagen boost. That’s not all when it comes to egg white nutrition. But do you know what egg whites actually are? Yes, they’re the clear liquid of the inside of the egg. That liquid is also called albumen or the glair/glaire. The most common egg we experience is the chicken egg, and the egg white is formed around both fertilized and unfertilized egg yolks and has an important job of protecting the yolk. Of equal importance is the job of providing proper nutrition for the growth of the embryo once fertilized. Much like the human body, egg yolks contain mostly water with about 10 percent being proteins, specifically albumins, mucoproteins and globulins. While the egg yolk is high in healthy fats, the egg white is practically free of fat, and much like the health benefits of eggs, egg white nutrition can do a lot for your health.

Let’s now understand the differences in egg whites versus egg yolks. Of course, the color is the first obvious difference. Remember that the egg white has a job of protecting the yolk. The albumen is the official name for the egg white and is opalescent-like or cloudy. That cloudy appearance comes from carbon dioxide, and as the egg gets older, carbon dioxide escapes leaving the egg with more transparency. So the cloudier, the fresher. Where does the white come in? Well, that happens when the egg white is beaten or cooked. When you crack an egg into a frying pan, the egg white immediately turns from opalescent to white. To further detail the egg white, the albumen has four layers alternating with thick and thin consistencies. The inner thick is called chalaziferous white. Younger eggs maintain the thick layers, but the older eggs start to thin out. You can easily identify the fresher eggs when you crack them into your pan. Fresher eggs stand up a bit more than older ones, which flatten out more. Nutritionally, both egg whites and egg yolks get credit for the protein; however, the whites contain more the the yolks. One large egg white boasts 3.6 grams of protein while the egg yolks contains about 2.7 grams of protein as reported by the U.S. Department of Agriculture’s National Nutrient Database. Overall, the egg lays claim to an amazing amino acid profile, including histidine, isoleucine, leucine, lysine, methionine, phenylalanine, threonine, tryptophan and valine, plus nine more. In fact, it’s so amazing, that the egg is often the guideline for the perfect protein structure, but if cholesterol is a concerns, going for egg whites may help and still allow you plenty of protein. Finally, according to the Protein Digestibility Corrected Amino Acid Score, whole egg scores exceed all other protein foods tested with a total score of 1.21 in the amino acid score rating system — more than the human body needs. Egg whites are a source of potassium, niacin, riboflavin, magnesium and sodium. The yolks are rich in vitamin A, phosphorus, iron, zinc and vitamin D. The yolk contains B6 and B12, folic acid, pantothenic acid and thiamine, phosphorus, iron, zinc, and vitamins A, D, E and K. You can also gain some calcium, copper, iron, manganese, phosphorus, selenium and zinc from the yolk. (10) And though you wouldn’t know it was there, egg whites have even been popular in cocktails due to their frothy appearance and binding properties. (11)

How to Use Egg Whites + Egg White Recipes

Eggs whites may be different than egg yolks in terms of nutrition, but they’re also way different in terms of their structure. You can’t make a fluffy meringue out of the yolk. It has too much fat, and fat breaks the protein bonds. Egg whites are often referred to in a chef’s kitchen as foam. This is due to the fact that egg whites have the ability to become the largest food foam when whipped — about eight times greater than in it’s original state. To get a bit more technical, beating raw egg whites incorporates air bubbles into the water-protein egg white. When you do this or heat it up, it releases the egg proteins or amino acids. Because some amino acids like water and some do not, it creates a frothy or meringue-like juxtaposition, which is how it “stands up.” It’s like a blend of air bubbles and water that support each other by bonding and then expanding. If done right, it then solidifies when heated, which is how grandma made a gorgeous meringue pie or souffle that didn’t fall. How to Separate Egg Whites from Egg Yolks Egg White Recipes In order to enjoy all the benefits of egg white nutrition, here are a few of my favorite egg white recipes:

Egg production has been around for a very long time, but according to the American Egg Board, about 300 million laying birds in the United States yield about 250 to 300 eggs annually. “In total, the U.S. produces about 75 billion eggs a year, about 10% of the world supply. About 60% of the eggs produced are used by consumers, about 9% are used by the foodservice industry. The rest are turned into egg products which are used mostly by foodservice operators (restaurants) and by food manufacturers to make foods like mayonnaise and cake mixes.” (12) Historically, bakers and chefs used copper bowls to stabilize egg white foams. The copper in the bowl combines with the sulfur component of conalbumin. The bond created is extremely tight, as the sulfur molecules are prevented from reacting with any other material. Today, a more common approach to stabilizing egg white foam is to add cream of tartar, known chemically as potassium acid tartrate. This acidic salt lowers the pH of egg whites, which in turns increases the number of free-floating hydrogen ions and helps stabilize the foam, much like copper. (13)

For the most part, egg whites are safe, but there are few side effects you should know. Biotin, or B7, can be depleted due to too much of a good thing. Biotin deficiencies may cause skin disorders known as cradle cap in infants and seborrheic dermatitis in adults. If there’s excessive loss, you could experience hair loss, seizures, loss of muscle coordination and muscle tone, and muscle cramps. See a doctor if you suspect you have these symptoms. Salmonella is a common concern in raw egg whites, but it’s typically destroyed once cooked long enough, though soft-boiled eggs and the sunny-side up versions are still subject to live salmonella. According to the Centers for Disease Control and Prevention, about 1 million foodborne illnesses resulting from salmonella poisoning are treated in the United States, with about 19,000 hospitalizations and 380 deaths. Note that there are various sources of salmonella poisoning from vegetables to livestock, not just raw eggs. (14) In some cases, eggs can cause allergies. When this happens, the body mistakes egg protein as a harmful substance. You may experience swelling, wheezing, runny nose, watery or red eyes, nausea, diarrhea, or vomiting. Make sure to see a doctor right away if these symptoms occur. Final Thoughts on Egg White Nutrition